Pimpin’ on the Catwalk

The year, I think, was 1992. I had just returned from a lengthy and life-changing backpacking trip through Asia. I was also broke.

Bored, I started accompanying a friend to various interviews with talent agents in downtown Toronto. Each one she met also expressed an interest in representing me, since I guess there was a new taste for “ethnic looking” young men.

Why not? I said yes. I needed the money, as I was a very much indebted 20-something student.

I got a few interesting calls. Most notably were recurring non-speaking gigs on popular Canadian TV shows of the time: Street Legal and Catwalk.

The former was a cultural institution in Canada. My most memorable experience on that show was playing someone I called “Unspecific Ethnic Leader #4”, since my role was to look intrigued by character Leon Robinovitch (actor Eric Peterson) and his unlikely bid to become mayor of Toronto.

That show actually created some timeless local stars, Sonja Smits among them. Weirdly, decades later, I would serve on the Harbourfront Centre Board of Directors alongside Sonja.  I could not resist introducing myself to her by saying, “Actually we met many years ago. We shared a scene together, when Leon was running for mayor.” Of course, she had been an actual actress. I was an extra with no lines, making minimum wage.

Catwalk was a new show at the time. It starred the newly minted star Neve Campbell (of House of Cards and Gray’s Anatomy fame).  It was about an up-and-coming band trying to make it in the big city. It was awful.

I had walk-on roles in three or four episodes; I really can’t remember. I do remember that I found it horribly embarrassing, but I needed the few dollars that it earned me. The money was better than for other gigs at the time, since for some reason Catwalk filming always went late.

For some reason I never fathomed, my non-speaking extra role had consistency. I had a uniform. One of the assistant directors described my look as “pimpish”. Great. This is what they made me wear:

Sounds bad, right? It was.  The worst part was having to walk down the street during my meal breaks, wearing that ridiculous costume.

I have never been able to watch an actual full episode of Catwalk. I find it makes me dumber, and I can’t afford to lose any more IQ points. But I did find the pilot episode on Youtube:

If you watch carefully, you will note that I appear two places simultaneously in the first two minutes. I’m dancing on the dance floor AND I’m at the bar. Yes, such is my pimpin’ power.

Because no one should have to watch that clip, here are some stills with my big fat head in them:

Well there you have it. That was my sole brief flirtation with being on Canadian TV in the early 1990s… unless you count the time when this guy played a fictionalized version of me in another Canadian TV show, ReGenesis: 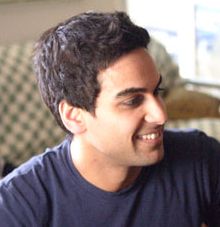 But you can read about that here.